I wasn’t assigned to go for this investigation, but I wanted to because I was rather inspired by Ariel Waldman‘s talk when she came to our class. My decision to go for Science Hack Day was to intentionally push myself out of my comfort zone because 1) I never really considered myself a science person. 2) I don’t like to code or anything like that. 3) I don’t like crowds. This hackathon was three of all those things, but so much more. My other classmates, Jamie and Jieying were there too. We didn’t intentionally set out to form teams but it happened rather organically, when Jieying, at the last minute decided to pitch her idea: what if you could give a digital signal to someone that you feel emotionally attracted to?

Side note, but Jieying’s bravery to just stand up and pitch at the last minute was admirable. She is my new hero.

We had a difficult time in the beginning because we didn’t have the hardware, and wasn’t familiar with the software (we wanted to use Neuropyp but it was so hard to figure!). We only really got started at 4pm, and decided to just do something much simpler: using muscle and pulse sensors to detect the “attraction” instead of brain activity. I didn’t feel as useless as I thought I would, because I actually managed to figure some code and hardware stuff out. This made me realize that, while I’m not some command-line ninja, there is still value to being scrappy and hacking my way into making things look and work the way we need to. We also played and interacted with other scientists and enthusiasts while we make. There was also a Telescope Viewing at the end of the night, serenaded by one of the organizers who sang science love songs (super cute).

This is a dying star 😦

During the demos, we got to see what others created. These were a couple of my favorites. 2. This lady made balloon costumes. Quite literally. It was epic. 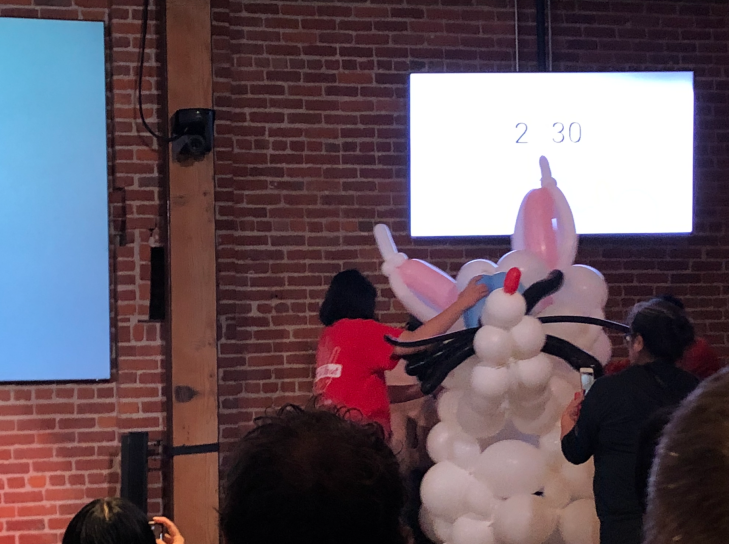 And this is us doing the demo! People were laughing at how strange and ridiculous I looked with all the sensors taped to my face. 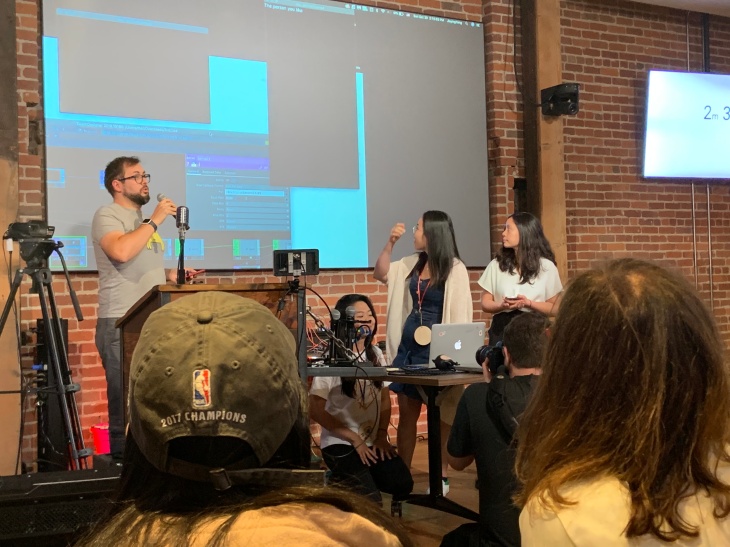 But! They created a category for us, and awarded us with “Best Dating App” lol. We were really surprised, but pleasantly so.

All in all, I thoroughly enjoyed my experience because I got to meet such a diverse group of people! Astronomers, physicists, biologists.. and so on. The best part was how approachable and unintimidating everyone was — it got me inspired! Everyone was just there to make things, with little expectation. It was an environment where everyone helped each other out, where it was okay to fail, where people celebrated when one another when they succeeded.

I think my biggest takeaway from this experience is how I need to apply this type of mindset to my senior project as well. If the technology or the “how” is too steep for me to achieve in the given time, what’s the next best thing I can do scrappily to showcase my idea? It also taught me to be okay with being uncomfortable, that it’s okay to fail (and that it doesn’t define me a failure), to celebrate when other people succeed (even when I don’t) and most of all, to have fun along the way; reaffirming once again, that I should always be stepping outside of my comfort zone, and do the things that scare me the most.